harts in the news

the hart silversmiths: a living tradition

“This exhibition celebrates the remarkable tradition of silversmithing that has been carried out by the Hart family at The Guild in Chipping Campden for over one hundred years.

Their workshop is the sole survivor of C.R. Ashbee’s Arts and Craft Guild of Handicraft which relocated to Chipping Campden in 1902. Four generations of talented Hart silversmiths have worked and are still working in the same workshop using the same tools and techniques.

On display will be a selection of original historic design drawings that have been cleaned and conserved through the Harts Silversmiths Trust. These are works of art in their own right and will be accompanied by both historic arts and crafts silver and unique contemporary silver objects designed and crafted at the Hart workshop. These have been generously lent by the Hart family and a number of private lenders for which we are extremely grateful.”

Silver Start to the year for court barn museum

“The museum was awarded Silver at the Cotswold Tourism Awards in the small visitor attraction category in the New Year and is currently enjoying an exhibition of one of Campden’s most celebrated silversmiths which runs until Sunday, March 2.

GofH: a century of fine silver in Campden celebrates the on-going craft traditions of The Guild of Handicraft and in particular the Hart Silversmiths Trust Project to conserve, catalogue and digitise the important collection of more than 3,000 drawings produced by Hart’s workshop over the last century.

The vast majority of these drawings and designs were created by George Hart but it also includes some drawings by C.R. Ashbee with many of these on display for the first time.

Additional pieces have now been added including a silver weavers shuttle, made by Rex Hart, grandson of Guildsman George Hart, which was commissioned by Geoffrey Le Mare, Upper Bailiff 1975-76 and presented to the Worshipful Company of Weavers. There is also a pair of bookends in silver on display which represent the façade of Woolstapler’s Hall, Campden’s oldest house built in 1340.

Curator Sarah McCormick Healy said: “I love the way the Harts can make traditional pieces like the silver claret jugs, and spoons but they can also turn their hand to the more ‘quirky’ designs.”

the hart silversmiths: a living tradition

Exhibition at Compton Verney Art Gallery in collaboration with the University of Warwick and Hart Silversmith Trust.

“This exhibition explores the evolution of a unique living tradition in design and silversmithing which has its origins in the Arts and Crafts movement.
Architect, designer and social reformer Charles Robert Ashbee (1863-1942) established The Guild of Handicraft in Whitechapel in 1888. Inspired by the anti-industrialism of John Ruskin and William Morris, Ashbee believed that good design and craftsmanship depended on good social conditions and in 1902 Ashbee, the guildsmen and their families, moved from their homes in London’s East End to the Cotswold town of Chipping Campden.

Among them was silversmith George Henry Hart (1882-1973). He and three subsequent generations of the Hart family continue in the Arts and Crafts tradition to this day, producing handmade silver in the same workshop in Chipping Campden. The exhibition tells their remarkable story, bringing together historic and contemporary commissions alongside the spectacular drawings which inspired them.”

“Harts is still sited in George’s original studios, in The Old Silk Mill, off Sheep Street not far from the centre of Chipping Campden. Visiting their workshops you find very little has changed. Forty year-old invoices, designs and drawings hand from hooks in the low beamed ceilings. The same wooden workbenches, pitted by years of cuts and knocks, are crowded with wonderfully worn implements, their wooden handles stained and polished with use, and the sound of hand-beating the silver – ‘planishing’ – is the same sound the visitor would have heard a century ago.”

“The text books leave the Chipping Camden experiment at around the outbreak of the First World War, the ostensible end of the dream. So it is surprising to learn that Ashbee’s legacy is alive and well in his Cotswolds idyll. Ashbee et al were always designers rather than craftsman. The craftsmanship was left to artisans rather than the effete band of Arts and Crafts aesthetes. George Hart was one of the original silversmiths who moved with the Guild of Handicraft from London to Chipping Campden in 1902. From 1912 he took over the running of the workshops and was joined in 1930 by his son, Henry. Now George Hart’s grandson, David Hart is left to uphold the tradition of exquisite work of the Guild of Handicraft.

Hart’s consists of four individual silversmiths, (including David Hart’s son and nephew) who share the work and the costs involved in running the business and the expensive materials. Their work is a mix of private commissions and presentational silverware, reproductions and the ever-present market for ecclesiastical silverware. David Hart says that less of their work now comes from the church although it remains a steady stream, much of it consisting of the replacement of stolen objects and artefacts.

Hart’s doors are always open to the public and they are happy to show visitors around the workshops which are little changed from the original buildings which Ashbee and his associates moved into in 1902. Hart’s maintains the afterglow of the fantastic burst of creativity and idealism which characterised the Arts and Crafts movement.”

“Ancient cracked plaster peels away from the walls on the bare oak staircase up to the first floor workshop. Inside bills dating from the early 1940’s hang from the low, beamed ceiling; antiquated tools and price lists from long defunct bullion dealers line the walls, and the only automation in sight is an archaic hand-worked silver rolling machine.

The scene is Hart Silversmiths, in a quiet side street in the Cotswold town of Chipping Campden.

It reminds the visitor of the wedding dress scene from Dickens Great Expectations; it is a time capsule.” 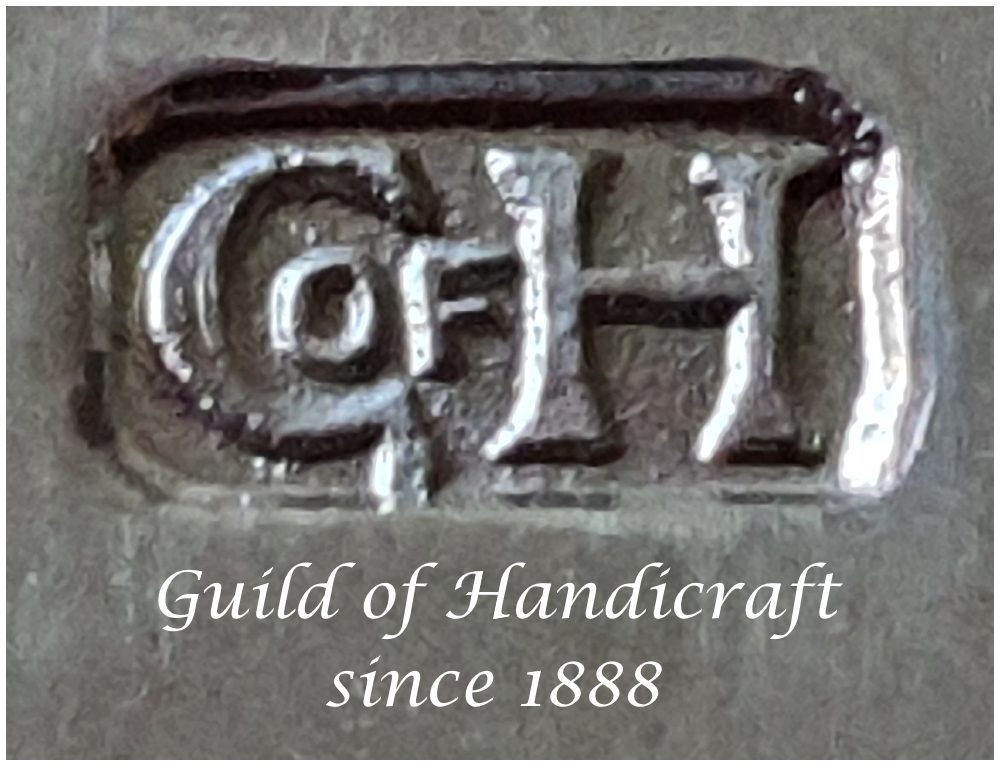